(During the reign of Alexander Ypsilanti (1774-1782),…, the monastery was fortified with a new wall, very thick, seven meters tall. In 1779 it was build a bell tower, where there is a marble plaque with the initials of the ruler and the family coat of arms).

“The printing house established at Trei Ierarhi (Three Hierarchs) is considered to be the first in Moldova. The printing press issued the first book in Romanian “Cartea romaneasca de invatatura” (Romanian Book of Knowledge) (1643), and also other reference books for the Romanian culture.

In 1821, it’s from the courtyard of the Monastery Three Hierarchs that was given the signal for the liberation of Greece, through the voice of Alexandru Ipsilanti who presented a Proclamation (28 February 1821) in which he stated the objectives of the Eteria, in it’s fight for the liberation of the Balkan nations.
In 1997, in the monastery’s churchyard was unveiled the bust of Mihai Eminescu, who had lived here for a while.” 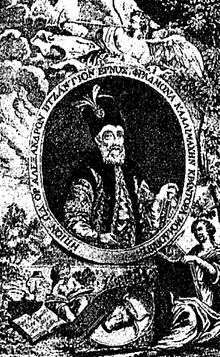 He was succeeded by son-in-law Constantine Ypsilantis.